I Wrote A Play (And Feel Awful About It)

Some context initially will be helpful. One of the units I have studied this semester is titled “World Theatre: Cultures and Concepts.” At first I was skeptical about choosing a theatre unit (admittedly it hadn’t been a second or even third choice) as theatre had always to me been a strange beast that had never quite grabbed me. Yes I could appreciate great acting and so often enjoyed an absurdest here, a Jacobean tragedy there, but I viewed English as literature and books and writing stories. Though I reached out to the stage I had never quite grasped it.

But now I’ve written a play…and I’m terribly upset because of it.

I say “written” and “a play;” more accurately I produced the bulk of material and direction for a short, 20 minute piece that myself and 7 wonderful girls (yes it was a tough gig being the lone gent but someone had to do it…) would be assessed on for our final mark in the unit. By no means do I wish to be cast as the grand architect of the play. I had an idea for a story and was keen to write something but knew I had dramatic short-comings. I had no idea about choreography and little experience in blocking or staging. I wrote words and stage directions and oversaw the piece in a facilitator role, ensuring that an overall direction was maintained.

In short, I couldn’t have done it without Hannah, Darcie, Briony, Sofia, Sam, Carla or Georgia. To them I shall be eternally indebted. 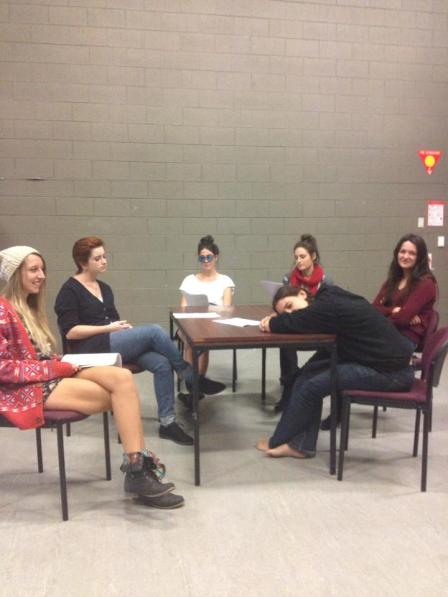 The girls enjoying yet another thrilling rehearsal

It has been an absolute joy to see an idea evolve into something you can watch, listen to and even reach out and touch. I never in my wildest dreams thought theatre and the process of creating theatre could bring me so much happiness, pride and sense of achievement. But now, following our final rehearsals and on the eve of our one and only performance, I am filled with a sense of crushing sadness. Why? Because it must end.

As writers it is universally accepted we are our own worst critics. Stories and articles are continually rewritten; past works are viewed with a sense of near repulsion and questions of “how did I write something that bad?” We surround ourselves with our work, continually preening and pruning the foliage of our craft (strained metaphor alert). As such, it is heart breaking for me to think that a piece that has been the source of so much enjoyment for me must be murdered in it’s infancy, before it can grow and mature into its full potential. As with any other literary production, a play and a script is something you wish you could keep going over and over, rewriting and fettling until you’re as close to satisfaction as is realistically possible. In our case…we’ve had 3 weeks.

One of the unique aspects of theatre, and an aspect that has been particularly highlighted throughout the duration of this unit, is that each performance of a text stands alone as its own entity. No two performances will ever be the same, will ever share the same space and time. An expression our tutor used was that theatre is special as you “share the same air.” Each performance has its own unique connection with the audience that is brief and can never be replicated. The thought that our text will only ever have one audience, one connection, to me is very distressing. I’m sure that the other members of the group, though now considered close friends, would look upon me with a confused expression. Our performance barely makes an impact on our overall grade.

So why such an emotional attachment? Pages of script litter the floor of my bedroom and study; hurried notes populate the pages of various notebooks and papers. To quote one of the characters in the play “my life has been the paper for the past 4 weeks,” and now with the onset of its performance it begins to all feel a little worthless. That’s not to say I no longer care, no longer feel pride in my work, even if it is only 14 pages of questionable penmanship. It is what it is and may never have the chance to be what it could be.

I suppose a silver lining is that Media Watch (never really did like that title) did exist. It will have its time and its moment and speak to an audience that will never be knowledgeable of the creative journey behind it.

It’s a journey I vow will have a lasting imprint on my creative present and future. Thank you again to all involved, this probably meant a lot more to me then it ever will to anyone else.